Make a newspaper for camp

Are you attending a summer camp these school holidays? As much as you’ve been looking forward to spending some time away from home and enjoying your favourite activities together with your fellow campers, we can assure you that your instructors have been working tirelessly to ensure you have the best possible camp experience.

Theatre camps, sports camps, language camps, Scouts camps, adventure camps or art camps.... the possibilities are endless! Whether it’s a day camp or a sleepaway camp, nothing beats being away with your friends and spending all day doing fun camping activities! Are you looking for a fun and creative way to get your campers ready and buzzing for camp? Or have you just had the ultimate camp experience and want to surprise your fellow campers with a unique and exciting souvenir? Then why not make your own Happiedays camp newspaper?

What to feature in your camp newspaper

In need of a little inspiration? We’ve listed several topics which you can feature in your camp newspaper. Depending on whether you’re creating your camp newspaper before or after camp, you can get fun and creative with these topics. We’ve already prepared several adventurous templates for you to choose from. Get inspired or start from a blank template if you want to start from scratch.

Summer camps can be a lot of fun and typically include lots of fun activities, anecdotes, songs and mischief.

Legend has it… there’s always a haunted cabin at summer camp! Whether it’s an old lady that appears in the mirror or a ghost who keeps slamming the windows shut, a haunted cabin is part and parcel of summer camp. Get campers into the mood by recounting the alleged backstory, reporting on rumoured incidents from past camping experiences and interviewing those (un)lucky campers that were assigned the infamous cabin this summer! Every camp newspaper should have a exclusive ghost feature!

At sleepaway camps, the final evening always turns into the most memorable. Have you organised a large bonfire or a big party? Report on the night’s events and add lots of fun pictures! Who played guitar at the bonfire? Which group had the best skit? What are the lyrics to the famous campfire song? Who danced with who at the party? Who was in charge of the decorations? Who had the best dance moves? Relive your final night together in your camp newspaper.

We all know that campers and counsellors alike love to get up to some mischief during camp! And it’s camping tradition to pull pranks on fellow campers or counsellors as part of this mischief. In your camp newspaper, give an account of the best pranks pulled this summer. Did someone swap the counsellors' sugar with salt? Did campers sneak out for a midnight swim? Did counsellors wake everyone up with banging pots and pans?

War cries are an essential part of every camp! Campers are often split into different groups and typically create their own group chants to promote team spirit as well as poke some light-hearted fun at other groups. In your camp newspaper, you can add the war cries of the different groups as a fun memento of the summer!

Add a log book or overview of all the fun camping activities! Whether it was swimming, singing, dancing, canoeing, painting… both campers and counsellors undoubtedly had a great camp experience. Add any fun photos or anecdotes you can think of, like when Susan tipped her canoe or when Elliot jumped of the highest diving board. Make your camp newspaper as personal and as fun as you can! 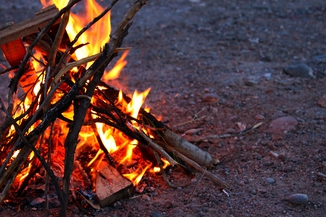 Personalize your camp newspaper with Happiedays

With Happiedays, you can personalize each copy of your camp newspaper. Add a name, photograph or even a customised profile of each camper to your newspaper and have it delivered straight to their doorstep. It’s easy to do, with Happiedays! Simply choose a template, create your design and place your order. Happiedays takes care of the rest! Relive those “happiedays” with your very own, unique, camp newspaper.

Discover our templates
Select your region